Discover the Object for GT 2018

The peacock is one of the most culturally significant birds in Iranian culture; it appears in art and poetry from the Medieval period onwards with great regularity. The symbol of Persian/Iranian monarchy. This symbolism originates from the Peacock Throne, a famous golden throne stolen from India by the Persians in 1739. Peacocks were popular also in ancient Persian cuisine and were sometimes worshipped. One example of a Persian community who worshipped the peacock were the Yezidis, who inhabit the Armenia, Kurdistan and Caucasus mountains. The Yezidis worshipped Malik-e-Taus, a redeemed devil in the semblance of the peacock.

The peacock is part of the eclectic collection of art formed by Miss Ellen Tanner following her journey to the Middle East in the 1890s and it was donated to the Holburne Museum by Miss E. G. Tanner in 1932. The peacock will part of the exhibition “Bath to Baghdad”. See related events: http://www.holburne.org/events/bath-to-baghdad/?instance_id=12103

Catrin Jones – Curator of Decorative Arts at the Holburne Museum – recalls Miss Tanner mentioning a game in her diary: “had a comfortable evening playing colorito, a convenient, portable game, of which we were all immoderately fond…”[and later] “…and after dinner finished the day with violent struggles at our new and favourite game…”.

You can find more info about Colorito game here:
https://boardgamegeek.com/thread/433041/introduction-forgotten-abstract-gem-1892 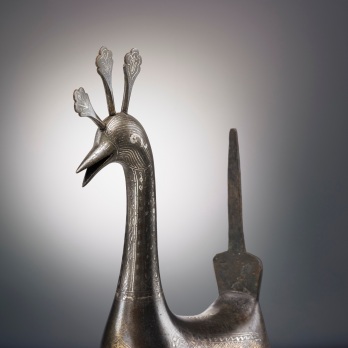 For GameTale 2017, we have in total 3 game objects, reproductions of museum artefacts kindly offered by the National Trust (NT) UK, the Holburne Museum and the Library at the University of Bath. Gametellers will select one of those objects as a base for their game.

The NT is offering no less than (1) the Palladian bridge at Prior Park; (2) the Holburne Museum is offering a curious Netsuke figurine representing the Legend of the Badger Tea Kettle; and directly from the collection of the University of Bath we got (3) Sir Isaac Pitman’s death mask.

Probably Prior Park’s best known feature, the Palladian Bridge, is an elegant and eye-catching example of architecture. The Palladian Bridge at Prior Park Landscape Garden was built in 1755, the last of three of its kind built in England. It was created in the 18th century by local entrepreneur Ralph Allen, with advice from ‘Capability’ Brown and the poet Alexander Pope. Palladian architecture reached the height of its popularity in England during the 18th century. 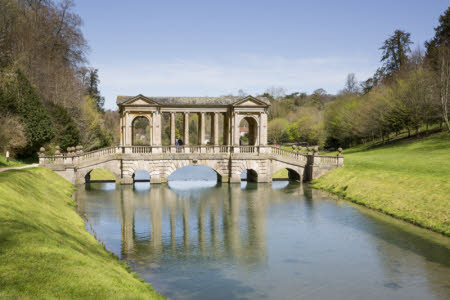 Venetian architect Andrea Palladio inspired the building of structures such as the bridges at Prior Park and at Stourhead. Palladio himself was influenced by the classical architecture of the ancient Greeks and the ancient Romans.

Seeking to revive the principles which underpinned ancient Roman architecture, he stressed the importance of proportion, symmetry, and the correct use of the Classical orders.

His influence was magnified by a series of important publications, not least his Four Books of Architecture (I Quattro Libri dell’Architettura), published in 1550.

Palladio’s vision was brought to England in the early seventeenth century. A key figure in this process was the architect Inigo Jones (1573-1652), who made several trips to Italy, acquired a copy of the Four Books of Architecture, and collected original drawings by Palladio.

Never a plagiarist, the strong influence of Palladio’s ideas can, however, still be seen in Jones’ projects for the Royal family: the Queen’s House at Greenwich, Banqueting House in Whitehall, and Queen’s Chapel in St James’, London.

Although the principles of Palladianism never ceased to be influential, the advent of the English Civil War in 1642 and Jones’ death a decade later in 1652 brought to a halt this great state-sponsored Palladian movement.

In the 1710s, nonetheless, a generation of architects began self-consciously to revive what they saw as the purity of Palladio’s vision – a process aided by the first complete translation of the Four Books of Architecture into English from 1716.  A leading figure in this was the Earl of Burlington (1694-1753), whose own projects – especially Chiswick House – helped set a trend.

This Netsuke figurine is part of the collection of the Holburne Museum in Bath. Item number F42.43. And was given by Reverend H.H. Winwood in 1920. The figurine was made with ivory and was carved in Japan in the 19th century.
The figurine displays The Legend of the Badger Tea Kettle, which is a common theme in Japanese folktales. There are different version of this particular tale:

(2) Bunbuku Chagama, where a raccoon dog – or tanuki – uses its shapeshifting powers to reward its rescuer for his kindness https://en.wikipedia.org/wiki/Bunbuku_Chagama

(3) “The Miraculous Teakettle”, p. 60 of the “Asian-Pacific Folktales and Legends”, which you can preview here: https://books.google.co.uk/books?id=3XcL8Qp4wrcC&pg=PT61&lpg=PT61&dq=The+Miraculous+Teakettle&source=bl&ots=3FE6wBSTWg&sig=5y4OfbOvKF9d5mUe8_wSGS5uvB0&hl=it&sa=X&ved=0ahUKEwippo7OsOvWAhVGuhoKHU4DD0MQ6AEIRDAI#v=onepage&q=The%20Miraculous%20Teakettle&f=false

Death Mask of Sir Isaac Pitman from the Library Collection of the University of Bath.

Sir Isaac Pitman (4 January 1813 – 22 January 1897), was an English teacher who developed the most widely used system of shorthand, known now as Pitman shorthand. He first proposed this in Stenographic Soundhand in 1837. He was also the vice president of the Vegetarian Society. Pitman was knighted by Queen Victoria in 1894.
The first distance education course in the modern sense was provided by Sir Isaac Pitman in the 1840s, who taught a system of shorthand by mailing texts transcribed into shorthand on postcards and receiving transcriptions from his students in return for correction. The element of student feedback was a crucial innovation of Pitman’s system. This scheme was made possible by the introduction of uniform postage rates across England in 1840.

It is 18:00 and our teams are polishing their games. We will showcase the games tomorrow May 31, from 14:00 to 17:00 in the Elwin room at the Bath Royal Literary and Scientific Institution (BRLSI) in Bath. More info about the event HERE.

BRLSI is on the West side of Queen Square, in the centre of Bath near Milsom St, the Circus and Royal Crescent. Join us to play some games!

The first edition of GameTale is starting at the University of Bath. Opening May 29 at 10 am in Room 1W 2.102. Follow the event photo-diary in this website, within “GT 2016“.

For GameTale 2016, we have in total 5 game objects, reproductions of museum artefacts kindly offered by the National Trust (NT) UK and the Bath Royal Literary and Scientific Institution (BRLSI). Gametellers will select at least one of those objects as a base for their game.

The NT is offering an antique (1) Urn from Dyrham Park, one of their properties between Bath and Bristol. The BRLSI is instead offering: (2) a sculpture from Gahna made of two pieces, a Leopard and a drum, (3) a Romano British bronze brooch, (4) the tooth of a giant ichthyosaur and the (5) complete skull of Pelagosaurus typus.

Blue and White small Urn, currently located at Dyrham Park, a property of the National Trust between Bath and Bristol. Delft, circa 1690s

The urn is symmetrical across the horizontal axis with two distinct faces with different designs. One side depicts a martial scene with four horses and riders in classical military dress, supported by a foot soldier. The other side depicts a central seated queen: enthroned, under a canopy, above a mat, wearing a crown and holding a sceptre. The queen is supported by two classically dressed soldiers to the left, individually with shield and spear, while to the right are three maidservants in classical dress. Each carries a gift: one a large plate with small round food items – which the queen reaches out for – another carries a large vessel. The twin scenes suggest an allusion to the joint monarchy of William and Mary, and perhaps more closely identifiable with the brief period between their accession in 1689 and Mary’s premature death 1694. During this period when William was at war each summer, Mary would rule individually in his absence.

The urn is marked with the maker’s mark ‘AK’. This was for Adrianus Kocx, the owner of the principal faience pottery in Delft called ‘De Grieksche A’ – ‘The Greek A’. The Greek A was the favoured supplier of Delft to Queen Mary, providing many ornaments primarily for the display of flowers. This urn would have great resonance for William Blathwayt, the owner of Dyrham Park and Secretary at War for William III. Be it a personal purchase for the house, or perhaps, fancifully, a gift from William III, it is nevertheless yet another example of how Blathwayt created a multi-media and all-encompassing environment at Dyrham, which at every opportunity reflected and affirmed William Blathwayt’s loyalty to William and Mary through a shared aesthetic programme.

The Fante, who made this drum, regard the leopard as a royal animal, symbolising power and wisdom. Therefore, it is likely that this drum is connected to ceremonies of a chief or the king of the Fante community. During the so called “Scramble for Africa”, initiated by the Berlin Conference, Britain received a substantial amount of territory on the African continent. The Asante kingdom (today’s Ghana) and Nigeria were from then on part of the British colonies. Collecting was seen as the primary way to gain knowledge about the foreign peoples during the colonial era

This circular bronze brooch was made during the first or second century AD, and was then excavated from Lansdown Sept. 1905.

Jewels have existed since antiquity, using different materials and techniques. Precious metal such as gold was typical of Greaco-Roman design, while Celtic taste preferred bronze ornaments. Common non-precious ornaments, such as this Romano-British bronze brooch, are particularly relevant to understand better Romano-British life and society. This brooch is a Roman piece of jewellery, as well as an example of Gaulish enamel work and Celtic symbolism. We need to use our imagination to envisage to original appearance of this ornament, for example if it was brightly polished or not. We can also imagine that originally the 6 small circular sockets held enamel inlay (or jewels?).

This tooth was once part of a giant ichthyosaur, Temnodontosaurus eurycephalus, about 190 million years old, from Lyme Regis. The Temnodontosaurus eurycephalus was a marine reptile, appearing somewhat like a reptilian dolphin, which grew to approximately 9 meters long, one of the largest ichthyosaurs from this time. Ichthyosaurs where common animals in the Mesozoic era, it shared the world with the terrestrial dinosaurs, but was not a dinosaur itself. Most ichthyosaurs ate squid like animals or fish, but this Ichthyosaur may well have eaten smaller marine reptiles.

One of the most intriguing groups of crocodylomorphs to evolve and diversify through the Mesozoic was Thalattosuchia — a specialised group of marine-adapted crocodiles. Thalattosuchia is made up of two monophyletic families, the near-shore Teleosauridae and pelagic Metriorhynchidae, and one species, Pelagosaurus typus, whose phylogenetic affinity remains a point of contention. This specimen is the most complete Pelagosaurus typus skull on record. Through its examination, the skull was shown to possess the majority of teleosaurid apomorphies including: four premaxillary teeth; small prefrontal; lachrymal visible in dorsal aspect; presence of mandibular fenestrae; dermal armor; and a straight tail. Thus, based on the analysis of discrete morphological characters and skull shape patterns, Pelagosaurus currently appears to be a teleosaurid.

Registration for GT 2016 is now open!

Registration is open till 1st of May!

The registration to GameTale is free but positions are limited. You can attend either as GameTeller (a.k.a. design and develop a game) or as volunteer.

Join the third edition of GameTale in Bath!